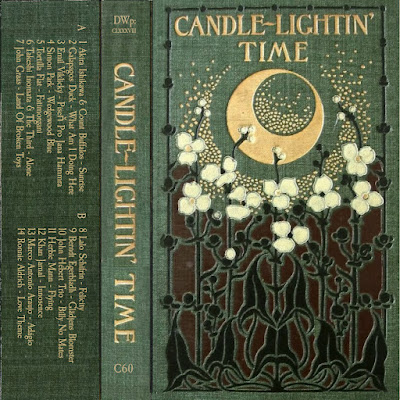 Hey! I used an old playlist full of beautiful, melancholic jazz and some soundtrack-like tunes to compile this one for you. I've never made coverart and compiled a C60 in one short afternoon before (I kept the title of the book, so that saved me hours of work - and thinking), but I was curious to try out Logamp as a free alternative to Mixcloud. There's virtually no activety over there, but it seems ok - and I get to share the streaming version here. While this is obviously meant to be a pleasant listen, it's still emotional and deep stuff. It's the sort of music I reach for to warm my soul on cold winter days. I'm sure it'll warm you up as well -Moahaha

LINK (or you can simply click on the image)

...aargh now that Logamp has been down for the last couple of days, it doesn't look as promising anymore. So I'm trying this Audius-thing. Let me know if it works for you (or rather if it doesn't). At least it appears to be a lot more popular: 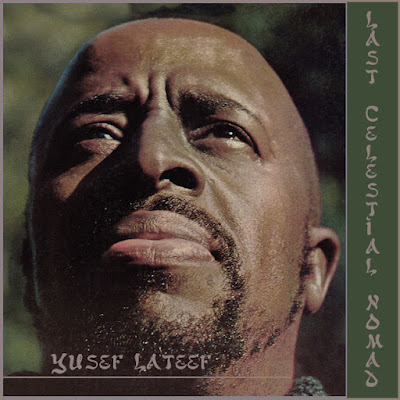 Hey! Happy new year I guess. Trying out Pixeldrain (looks very promising to me. Let me know how it works for you) with an old compilation of mine. This Yusef Lateef-tribute was originally shared back in January 2014. The link has been dead for years, so it's about time. My lazy CD compilation-like design makes this appear somewhat cheap and disposable but the content is really, really nice.

I don't really have any new mixes underways and got a lot on my plate this year. But I've been feeling I've reached the end of the line here several times before, so I won't call it quits just yet. As far as I know, all our old mixes and shares have at least one active link. No more Mixcloud, Mediafire, pCloud or Yandex (Btw: did the uloz.to links work for you?) for me, but I'm sure I'll be back with some C60's & C90's nevertheless. Anyway, here's what I wrote:

Yusef left us the 23rd of December 2013 and it seems dying is the only effective career move for an ageing artist, so his music will undoubtly get some extra attention in the next couple of years.

Over the last couple of years openminded jazz fans of blogland and elsewhere have been enjoying a flood of long forgotten spiritual and exotic jazz collections, shared 'n rare vinylrips and re-releases. For reasons unknown the author, multi-instrumentalist, soul brother, the true «world jazz» pioneer and perhaps Mr. Spiritual himself Yusef Lateef is sometimes mentioned as an influence, but rarely included.

Although an excellent tenor saxophonist leaving us plenty of classic post bop, swing and third stream compositions and recordings to discover and enjoy, I wanted to compile 90 minutes focusing on what really made him sonically stand out from the very beginning. In 1957 alone, our sound searching genius recorded material for 13 soloalbums (all worth having). Along with the more conventional jazz numbers middle-eastern, far east, spiritual & indian themes as well as his gorgeous flute, oboe and bassoon-playing and use of unconventional instruments like bamboo flute, shanai, shofar, xun, arghul, koto, gong, earthboard + a Seven-Up bottle and a balloon is already there.

On Last Celestial Nomad you'll actually get the impression Yusef played his flute and oboe (and balloon) more often than he played his saxophone. In reality its the other way around. Although representative for my favorite kind of Yusef sounds these 19 highly spirited compositions from 19 different albums recorded over a period of 15 years (1957-1972) is not an attempt to make a best of, or a representative introduction. Its like a mixtape with a unifying theme using material from one artist exclusively. Enjoy! 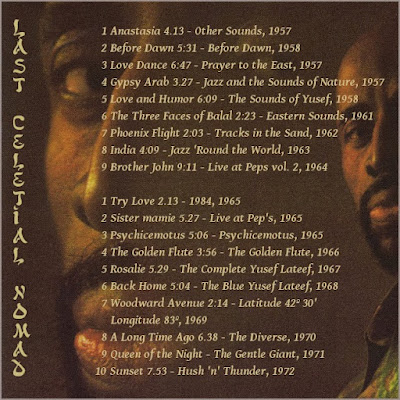