First things first: I think I'll have fewer mixes to share with you this year. I'm not about to quit or anything, but I have a lot on my plate these days. Normally I would have at least a couple of mixes ready, waiting in line. Because this is just something I do - while others meditate. But as for now I only have one C60 coming up, and it won't be fully finished for a little while. Which is why I decided to share:

Yet another vintage mix of mine that hasn’t been available for years - reuploaded for anyone interested. A fairly strange one. At least if you're not already "into jazz". In many ways it's the The Infinite Streams older, brainier sibling. I work alone in my studio and these are some perfect examples of my typical "working music". Not always, but sometimes. It helps me stay awake, focused and alert. Here's what I wrote about it back in April 2013:

-When I first heard Grachan Moncur III's early to-mid sixties compositions such as Evolution and Esoteric I think I had (and still have) a similar tingling sensation or brain orgasm comparable to what ASMR folks say they get from listening to whispering voices. Or maybe its closer to what mathematicians experience when they get an esthetical delight out of the supreme beauty of math? I'm just guessing. But this is only partly what spatial jazz is about. Its the careful attention to space, and I don't mean outer space but a soundspace - a room. Out To Lunch is probably the most well known example of jazz I know of that that can give you a hint. I ended up with 16 compositions and some of the bigger names in jazz are represented. All of them at their least conventional and most out there - except for Cecil Taylor, who is at his most stuctured. Hope you like it! -Moahaha 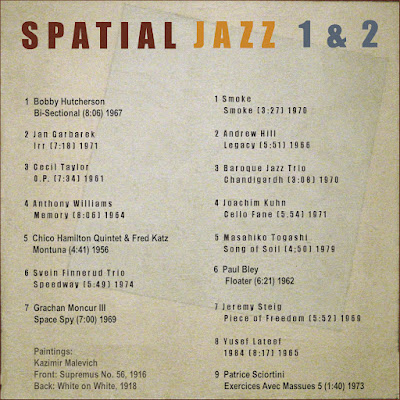 Get it Here (and if the Mediafire-file isn't working, just try again until it eventually does)
Posted by Moahaha at 1:58 PM