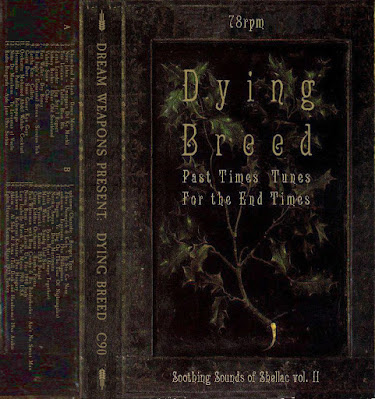 As it will take a little over a week from today till our next 20ft Radio special will broadcast, I decided I'd brush up on an almost eight year old C90 that was originally intended for सølγ שаябlɛş (which was shut down while I was on my finishing stages compiling this). A few of you may know this already - but here it is again, as an mp3 "special offer" for our blog-followers exclusively:

(Past Times Tunes For the End Times - Soothing Sounds of Shellac vol. II)

We all know mankind had its chance and blew it. But as far as I know we did create the greatest music in the universe, and that almost makes up for all the evil and stupidity. Here’s a little time capsule documenting a slice of musical expressions on planet earth from the early to mid 20th century. The sound of imaginary 78’s spinning should provide for some comfort and warmth while you prepare yourself for the very end. Enjoy! -Moahaha, December 2011

-it seems I've always had a tendency to try and make you think about the four horsemen of the apocalypse while listening to my nice collections of vintage tunes.


Btw1: A few of these songs aren't as obscure and unheard as they once were.
Btw2: I remember that Žikva Nemeček song were among a bunch of old tunes that were suppposedly ripped from 78's, but it doesn't sound 70 years+ old. And there's a couple more I never located the recording date for.
Btw3: While re-editing I messed up the tracklist a little bit on the B-side. But as I've said before: hey its for free!
Posted by Moahaha at 6:17 PM