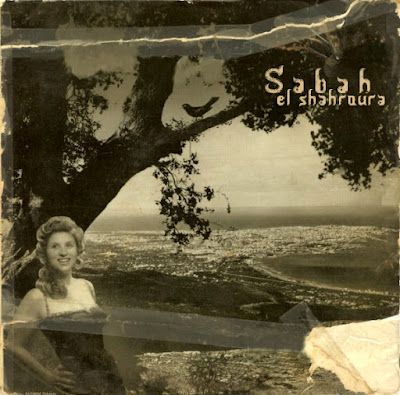 While waiting for my upcoming mix to broadcast here’s one more improved and repackaged Moahaha bonus-compilation «from the vaults». A relatively simliar 2x45 version was shared elsewhere in early 2013.
Sabah (1927-2014), also known as El Shahroura (=Blackbird) was a Lebanese singer and actress whose fame spread all over the arab and western world. Still I've never come across anything near a decent attempt on collecting an album worth of highlights out of the reported 3500 songs in her repertoire. Which is why I decided to have a go at it myself. The end result is this hour (or 2x30) of tunes selected from almost 20 hours worth of recordings. To my ears Sabah's voice doesn't quite match the otherworldly beauty of Fairuz’, but she could hold a note a for about a minute. Plus the instrumentation is in general more traditional/folkier and often infectiously furious -Moahaha
1 Mafesh Gheirak
2 La'a Ya Melowaa Le Albi
3 An Nada 'Nada
4 Minqullak Fakeena
5 Tou' Oua Doub
6 Laish Bitiz'al Laish Bitghar